NEWS: MSC Virtuosa floated out and launching October 2020:  The event was celebrated at Chantiers de l’Atlantique in Saint-Nazaire, France and is the third major new ship building milestone the company has celebrated in the past month at the shipyard.

The float out follows the successful delivery on October 31 of MSC Grandiosa as well as the steel-cutting ceremony on the same day of MSC Europa, the company’s first of five liquified natural gas (LNG)-powered ships.

MSC Cruises also unveiled on the same day a ground-breaking R&D project in conjunction with Chantiers de l’Atlantique named PACBOAT that will focus on the integration of a new fuel cell technology, especially relevant for cruising, on board the LNG-powered MSC Europa. The line said it was committed to contribute to the development of next-generation advanced environmental technology for the benefit of its own environmental stewardship journey and that of the entire cruise industry. 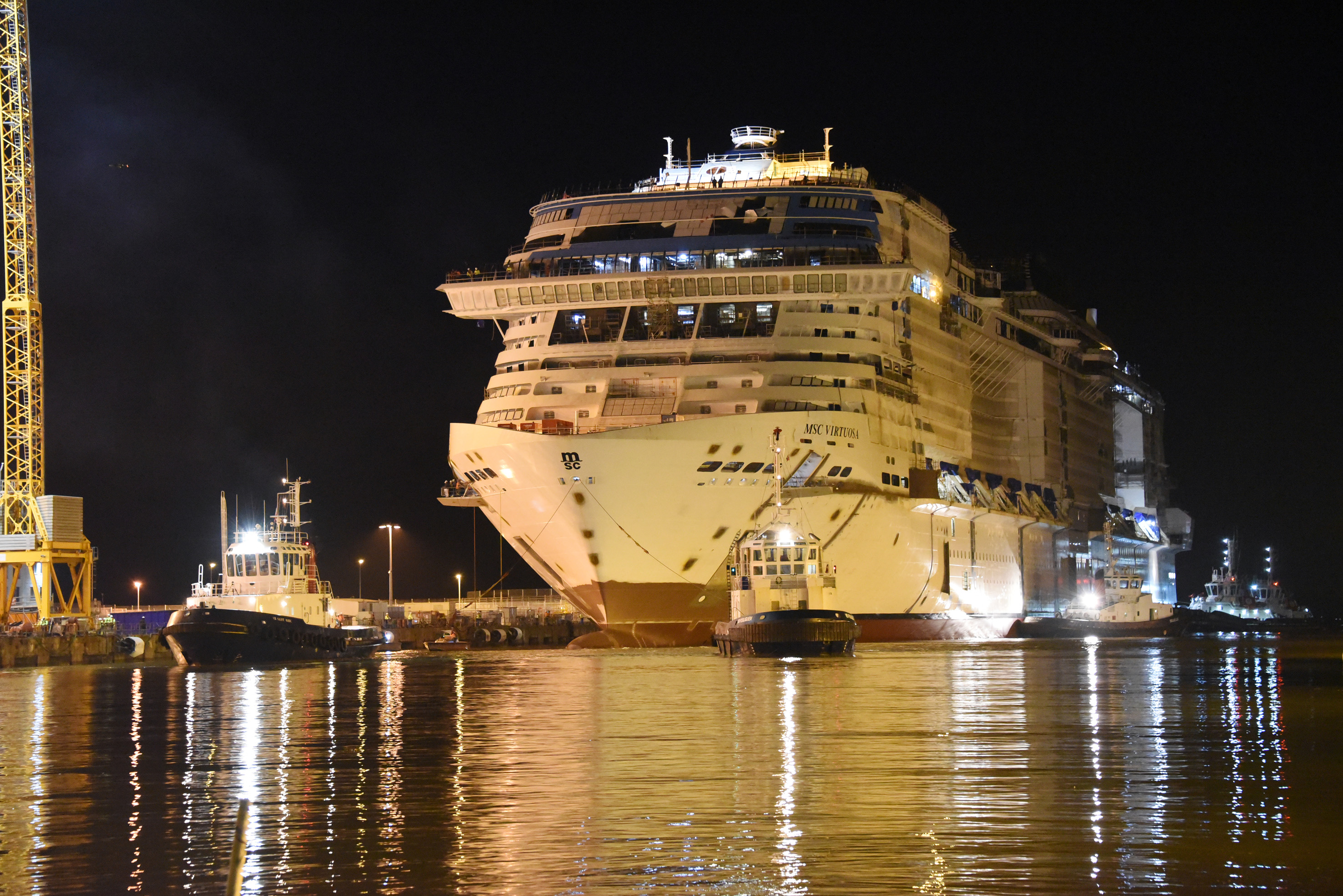 MSC Grandiosa was christened in Hamburg the following week on November 9. The company also announced that from January 1, 2020 it will become the world’s first fully carbon neutral major global cruise line. MSC Cruises will offset all direct carbon dioxide (CO2) emissions from its fleet marine operations through a blend of regular and blue carbon offset projects developed according to the highest standards by leading international entities that take immediate action on greenhouse gas emissions.

MSC Virtuosa will be the second Meraviglia-Plus ship after MSC Grandiosa and will now move to a wet dock for further construction and fitting until she is delivered in October 2020.

The sixth MSC Cruises ship to enter service since 2017, MSC Virtuosa will be as highly equipped as MSC Grandiosa with cutting-edge technologies and the second ship in the Company’s fleet to have a selective catalytic reduction (SCR) system and next-generation advanced wastewater treatment system (AWTS) to minimise her environmental footprint and ensure ever cleaner air emissions.

MSC Virtuosa’s SCR will help reduce nitrogen oxide by 80 per cent with the technology converting it into harmless nitrogen and water.

She will also be equipped with a next-generation AWTS to treat wastewater to a very high quality and the end product is of a better standard than most land-based municipal waste standards around the world.

MSC Virtuosa will also be fitted with shore-to-ship power which connects a docked cruise ship to a port’s local power grid to further reduce air emissions. This feature is broadly available across MSC Cruises’ entire fleet and has been standard across all of the company’s new ships since 2017.

These features add to other effective environmental technologies deployed on MSC Virtuosa and across the rest of MSC Cruises’ fleet to minimize and continuously reduce a cruise ship’s environmental impact, including: cutting-edge hybrid exhaust gas cleaning systems that remove sulphur oxide from ship emissions by up to 97 per cent; advanced waste management; ballast water treatment systems; latest-technology systems for the prevention of oil discharges from machinery spaces and various state-of-the-art energy-efficiency improvements – from heat recovery systems to LED lighting.

MSC Virtuosa’s maiden voyage will be a 7-night six-port Western Mediterranean cruise in November 2020 from Genoa, Italy. After a winter season in the Med, MSC Virtuosa will be deployed in summer 2021 to Northern Europe with itineraries to the Norwegian fjords and Baltic capital cities.

MSC Cruises will soon reveal the exact details of the appealing guest features on board MSC Virtuosa but like MSC Grandiosa, the ship will have a Mediterranean promenade lined with restaurants and mall-style shopping underneath a 93 metre-long LED Sky Screen, two original new shows from Cirque du Soleil at Sea and the world’s first virtual personal cruise assistant, ZOE, in every cabin.

The third of three Meraviglia-Plus ships, yet to be named, will enter service in 2023 and be powered by LNG. MSC Cruises is investing €5 billion in the construction of five LNG-powered ships with the other four set to propel the line’s futuristic World Class prototype with the first – MSC Europa – entering service in May 2022.

The World Class ships, like the Meraviglia-Plus prototype, will be built at the Chantiers de l’Atlantique shipyard in Saint Nazaire, France as part of an industry-unprecedented €11.6 billion plan that will see MSC Cruises’ contemporary fleet increase to 25 ships by 2027.